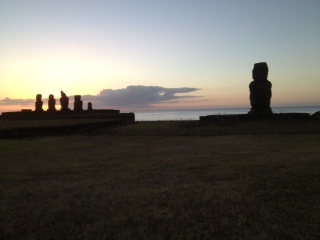 Looking out to Motu-Nui (farthest island)

We, all 4 of us with Earthwatch, spent the first two days mapping, drawing, photographing a new archaeological site.  The grass on Rapa Nui grows about 3 or 4 feet (a meter or more) high and Sonia, the archaeologist we are working with, has hired “cowboys” to cut the grass in an area south of Anakena on the north coast of the island.  Where the grass has been cut, we have found new archaeological evidence not seen before.  Scott and Lucy have been using an elaborate GPS which asks numerous feature-related questions (in Spanish, which works out OK since Scott knows quite a bit of Spanish) which they answer and provide with measurements.  Robert (Roberto) and I have been measuring, drawing and photographing a pair of “ahu” and the adjacent features.

The rest of the week, the guys have continued there while Lucy and I moved on to helping the National Park services with the reforestation project.  Wed. we watered, transplanted tiny trees, and weeded.  Thu. we watered and weeded!  All day!!  Tomorrow, I think we are moving on to planting trees.  All of us.

Thu. evening we went to see the Kari Kari dancers doing traditional dances with wonderful costumes and singing.  They were spectacular!  A couple of times they came down into the audience and invited spectators to go up on stage and dance with the.  One dancer was the brother of a local man working at our site.  It was a fun evening! 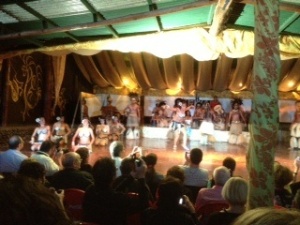 Fri. evening, Scott, Lucy & I, went down to the north waterfront of Hanga Roa to Tahai, where there are moai still standing on their platform.  They look very stark outlined by the setting sun.

Sat. We went on a tour with Francisco of the south and mid-west of the island.  We saw the volcanic crater Rano Kau at Orango, the ceremonial site where some archaeologists believe that men of the various clans competed in the bird-man competition to see whoa clan would rule for the coming year.  You can see the remains of a large village there and look out to the island, Moto-Nui, where the sea terns came once a year to lay their eggs.  We stopped along the way to see the huge cave, Ana Kai Tangata where some of the people lived for a time.  Got some great pictures of the surf spraying over the rocks and the inside of the cave where layers of rock were formed by pressure from the lava from Rano Kau.

Today, Sunday, I decided to kick around town rather than going on the tour of the north and east of the island as I found yesterday very long.  I went to Catholic mass with some others from the group.  It was very interesting.  The young people were all dressed in white and gathered outside until part way into the service then came in in a procession.  For some, it was their confirmation and part of the service was a brief catechism and dedication.  The young priest was very dynamic and his “sermon” was without notes and full of enthusiasm.  There were, I think, more tourists than locals and it was SRO.  The mass ended (for those not taking communion) with people extending what my church would call “the right hand of fellowship”.

I spent the next part of the day at the pool, did some shopping, met some Americans on another tour, helped a German couple get oriented so they could find some places they wanted to see (they only had 2 days on the island), and had lunch with my new American acquaintances at an ocean front restaurant.

Tonight, our little group is heading for dinner at another Rapa Nui restaurant to soak up some of the culture.  It is taking me a long time to upload pictures but I will try to include some later tonight.

Having taught elementary school for more than 25 years and been involved in many amazing technology and curriculum projects, I find I've developed a myriad of interests based on literature I've read and music I've heard. I've followed The Wright Three to Chicago, Ansel Adams to Colorado, The Kon Tiki Expedition to Easter Island, Simon & Garfunkel lyrics to New York City, Frank Lloyd Wright to Fallingwater, Pennsylvania, and have only just begun.
View all posts by mysm2000 →
This entry was posted in archaeology, Earthwatch, retirement, travel and tagged archaeological site, Archaeology, Earthwatch.org, Easter Island, Rapa Nui. Bookmark the permalink.

2 Responses to End of First Week!