One of the really neat things about travelling home to your roots is the opportunity to meet up with folks you haven’t seen for a long time.  I did this yesterday at a Swiss Chalet in Ancaster and had a great time.  In addition to catching up on lost time, there was the inevitable reminiscences and reminders of things not quite forgotten but perhaps not thought of for a very long time.

At one point, the conversation turned to some of the amazing women who impacted our lives when we were young and attending Livingston United Church in Hamilton.  Many of them long gone now, these women were connected . . . to each other, to their families, to the young and the old, and to their faith.  They were funny, caring, and devoted.  They were generous . . . with their time, their talents, and their wherewithall.  Some of them, no doubt, had problems and cares that went unseen.  But they reached out, down, and up.

They were all seekers . . . seekers of truth, of fulfillment, of opportunities to change their small part of the world!  They probably had no idea of the myriad ways they influenced us and helped us to become our own unique selves in a world of followers and faithless promises.  They gave us their faith in a loving God whose promises are real and everlasting and whose love is accepting.  Some of them had grown up in a similar nurturing environment; some of them had been drawn into the church family and perhaps encountered that kind of environment for the first time. But all of them passed it forward.  They were Sunday School teachers, CGIT & Explorer leaders, camp counsellors, nursery workers, choir members, song leaders, and sometimes reluctant speakers.  They built us up.  They prepared us to face the world and gave us an example of how to keep our faith and humour through the tough times.  I like to think they know now just how wide their influence was and I hope there were times when we let them know their importance to us while they were still here.  Recognizing the priceless gifts we’ve been given can be one of the best things to happen on the road! 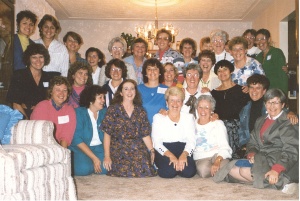 Some of the amazing women of Livingston!

Having taught elementary school for more than 25 years and been involved in many amazing technology and curriculum projects, I find I've developed a myriad of interests based on literature I've read and music I've heard. I've followed The Wright Three to Chicago, Ansel Adams to Colorado, The Kon Tiki Expedition to Easter Island, Simon & Garfunkel lyrics to New York City, Frank Lloyd Wright to Fallingwater, Pennsylvania, and have only just begun.
View all posts by mysm2000 →
This entry was posted in retirement and tagged faith, friends, Livingston United Church, reminiscences, roots. Bookmark the permalink.